A $5,000 reward has been offered by Federal Express for 23 original oil paintings on masonite by artists, Don Maitz and Janny Wurts. The paintings, taken from a FedEx truck on October 26, 1995, were en route from Florida to the World Fantasy Convention in Baltimore, MD when they disappeared. The FBI is investigating. The irreplaceable paintings are registered with IFAR (International Fine Arts Registry). Your help is needed.

$5,000 reward for information leading to the return of the artwork. If you see these paintings, do not intervene or ask questions -- take note of identifying characteristics (such as license plate number of the seller) and contact the police. 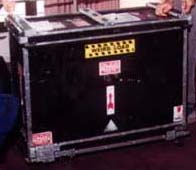 A photo of the stolen crate.

A black wooden crate containing 20 original oil paintings by prominent illustrator, Don Maitz, and three others by author/illustrator Janny Wurts, disappeared from a Federal Express delivery van in Baltimore on Thursday morning October 26. The paintings were all done in oils on masonite, with themes including wizards, knights, dragons, and whimsical fantasy creatures. The artworks were being shipped from the artists' home in Florida to the World Fantasy Convention in Baltimore for an exhibition.

Included in the crate were 20 works by Don Maitz, internationally recognized Science Fiction illustrator. These included two works done for the special edition of Stephen King's Desperation, due out from Donald Grant; seventeen new works for Guardians, a card game series just released that has sold over a million copies; and a book cover illustration for The Mists of Caledon. Maitz is best known for his illustration of the pirate from Captain Morgan Spiced Rum. He has three times won Science Fiction's preeminant Hugo award for illustration, and has also received a Silver Medal from the Society of Illustrators in New York.

The three paintings by Janny Wurts were covers she painted for her own novels, among them an October release in paperback from HarperCollins titled Keeper of the Keys; its forthcoming sequel Shadowfane; and the jacket painting for HarperCollins's British hardbound edition of Warhost of Vastmark, newly released this past August. Wurts is well known as a novelist, with seven titles to her credit; and as an illustrator. Her cover for her hardback novel, Curse of the Mistwraith, just won this year's Chesley Award for Best Hardbound Book Cover from the Association of Science Fiction Artists. Her cover for Master of Whitestorm twice won Best in Show at the World Fantasy Convention.

The crate containing the paintings disappeared at midmorning, on Lombard Street in the vicinity of the Inner Harbor Marriott in Baltimore. None of the other packages on the truck were disturbed. The loss represents untold heartbreak for the artists, who had shipped the paintings for exhibition purposes only. Insurance on them was a paltry $500.00 of their estimated $100,000.00 value, due to a policy by Federal Express concerning limited liability on works of original art. The theft was reported to the artists at 11:00 PM that evening and a police report was filed by Federal Express about twenty-four hours later. The only chance for recovery of their works remains the prompt and wide publicity of the images, that they can be recognized if they emerge in public and draw attention.

Color thumbnail images of the stolen works follows with details on titles and dimension. Identification is on the back of each painting. Additional information upon request, either from the Baltimore Police - Central District or the artists. The paintings are registered with IFAR.


These three paintings are cover art done by Janny Wurts for three of her books.


These three paintings are cover art done by Don Maitz.


These seventeen paintings are from the Guardians game card series.